What Is The Purpose of a Blast Wall? When it comes to blast resistance, there are a few options, depending on the situation. At RedGuard, we design blast-resistant buildings to protect building occupants and equipment in high-hazard areas from the damaging effects of explosions.

However, we are sometimes asked about blast walls and how they compare. In this article, we’ll talk about what a blast wall is and how it protects, plus, we’ll go into the best solution for your hazardous areas.

What is a blast wall?

A blast wall is simply a barrier used to protect the facade of a vulnerable structure and its occupants from debris and fire during an explosion or attack. The danger might come from an industrial accident, military action, or terrorism. They can also be used for construction, military, mining, airports, and processing facilities.

A blast wall is typically erected to safeguard a building and its occupants when a temporary threat is identified, after construction of the building is complete. Blast walls are usually added to structures that didn't require and had no blast resistance before the threat was identified.

On the other hand, a blast-resistant building is specifically used for occupied buildings or buildings that contain high-cost or specialty equipment, in areas where hazards could reasonably (or even likely) be expected. The entire building is blast-resistant, rather than just protecting one side, or the facade, of the building.

The Purpose of a blast wall

A blast wall is a temporary wall placed when a controlled explosion is planned, or when the likelihood of an accidental explosion or attack is identified. The threat it protects against might be seen as an anomaly.

Steel's ruggedness allows the wall to stand up to the explosion, and its malleability allows it to absorb some of the energy during a blast.

When should a blast wall be used?

To determine when a blast wall should be used, you must understand the type of hazards that could be present in the area it is placed. For example, in areas where the threat is seen as temporary, a blast wall might be enough to deflect shrapnel or simply protect the vulnerable structure of the building itself. In addition, blast walls can be combined to protect from multiple sides.

They are sometimes used in war or conflict zones, or as barriers during a planned explosion. In addition, military bases or airports might use them to protect aircraft or other expensive equipment. They can be used underground or underwater, and are used in multiple industries, many overlapping with industries that utilize blast-resistant buildings.

Blast Resistant Buildings are Made for Hazardous Areas

On the other side of the coin, there are areas officially classified as hazardous that contain a potentially explosive atmosphere due to ignitable gases, dust, vapor, or fibers and other particulates. The Occupational Health and Safety Administration, or OSHA, divides hazardous areas into three separate classes, with two divisions in each class. 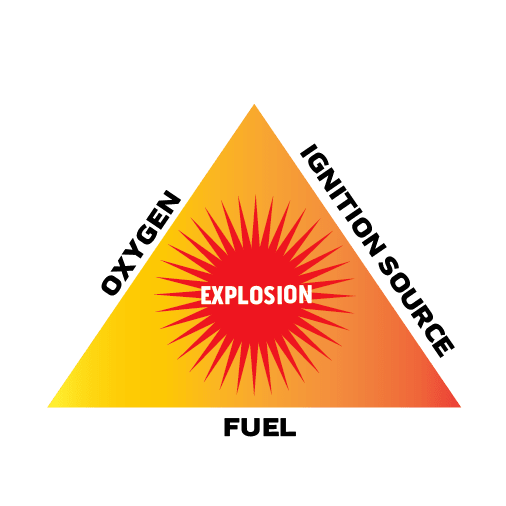 Whenever possible, it is best to avoid placing occupied buildings in hazardous areas. However, if that can not be avoided, that’s when blast-resistant buildings are added.

As a leader in the design and manufacture of blast-resistant buildings, we've worked with many worksites to keep those who work inside hazardous areas safe and we've even written previously about managing risks in hazardous areas.