When scrutinizing blast-resistant structures, one of the first considerations to make will be the type of structure that you need. You should always make decisions based on the particular needs of your facility, based on determinations from your facility siting study or similar recommended practices.

These are the areas that will be examined:

Once you’ve considered all of the details, you will be able to make the most informed decision about the right structure for your facility.

Blast tents are made using fabric tent walls, reinforced with loose steel support beams. While they provide some protection, the fabric in their design has not been practically proven for things like projectiles.

Blast-resistant buildings are made with steel walls, steel support beams, and reinforced welds. The closer together the beams are, the better since these beams act as a “rib cage” in ensuring the walls of the building do not collapse.

A pressure wave, or blast wave, is the bubble that expands outward from an explosion. The pressure wave causes what are known as “primary injuries” from the blast event. These are internal injuries to a body’s hollow organ systems, like auditory, pulmonary and gastrointestinal systems.

Even a blast event measured at 1.5 PSI can cause serious internal injuries and death.

Companies that make blast tents claim that the tent dilutes the pressure wave. So, while the tent is somewhat protective, some pressure will still be felt by its occupants, and materials inside may still be affected.

On the other hand, modular steel blast-resistant buildings offer protection from the pressure wave, therefore protecting the body's internal organs.

In published blast tests of blast-resistant building designs, little movement was seen by crash test dummies placed inside a BRB during a significant blast. No simulated harm to the dummies was observed.

The pressure wave discussed in the previous bullet can also cause a risk of debris and projectiles of anything in the blast tent as pressure passes through the fabric of the tent. This pressure can affect everything inside the tent, including its human occupants, leaving room for secondary and tertiary injuries.

All materials inside a modular blast-resistant building are thoroughly vetted for use in a blast-resistant environment, to ensure they stay put. So, along with the benefit of having solid walls that limit and deflect pressure during a blast event, the building’s internal components like flooring, walls, cabinetry, or fixtures remain fixed in place and do not themselves become deadly projectiles.

Projectiles in and around a blast zone are common. Images taken after serious blast events typically show large items, like equipment, vehicles, or pieces of metal shrapnel that have been propelled long 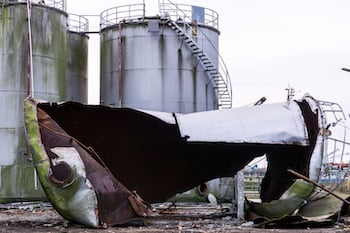 distances by the force of the wave. There is no guarantee that these massive objects won’t be thrown onto an occupied blast tent, causing crush injuries, or worse.

Blast-resistant buildings stand up to the weight and force of even large shrapnel, offering greater protection.

It has yet to be seen what happens when a large piece of machinery is thrown during a blast event onto a canvas tent since blast tests don’t account for that.

Ballistic resistance is offered in blast-resistant tents, but only in panels which are added to the structure. This could leave a great deal of the fabric structure vulnerable to puncture.

A blast-resistant modular building can be designed to protect against numerous threats, including ballistic resistance.

In a BRB, the coverage protects all walls, ceilings, and even the welds that join walls together, leaving no areas exposed. Some vendors can even provide results from specific ballistic testing which have been performed on their designs.

If ballistics is an essential element in your plan for safety, BRBs offer more protection than the fabric of a blast-resistant tent, supplemented with ballistic panels.

There are no official regulations that guide the practice of the oil and gas industry concerning the use of blast-resistant structures. However, the American Petroleum Institute (API) has recommended practices (RP) that can be used as guidelines. Specifically, API RP 752, 753 and 756.

API RP 756 provides guidance for managing risks from explosions, fires, and toxic material releases for personnel located in tents, but to be clear, it is not a recommendation for the use of tents. It’s a recommendation for how they should be used if you’ve already made the decision to use tents.

It states that facilities should “minimize the use of tents intended for occupancy in close proximity to process areas.” It also suggests that non-process hazards may exist which could present risks to tent occupants, such as collapse or injuries from fire or extreme weather.

API RP 752 and API RP 753 also provide guidance for managing risks from explosions, fires, and toxic material releases, but they refer to personnel in fixed buildings (752) and portable buildings (753). Like 756, it is not a recommendation to use either portable or fixed structures, but it tells you the best practices for their use, should you make that decision.

Buildings described in RP 752 and 753 are specifically designed to resist significant blast loads. When you use buildings with the correct response levels in classified areas, the risk of building collapse is greatly minimized. It’s important to note that just because a building touts its blast-resistant rating, not all BRBs are made to go into classified areas. The building should have an appropriate response level and duration time. Which buildings to use in specific areas would be discussed after a facility siting study.

You can imagine the sheer weight of a tent constructed of heavy materials to accommodate blast resistance. This in itself can introduce dangers from tent collapse due to extreme weather, and from large objects that fall or become projectiles during a blast event.

With a BRB of the appropriate response level and duration, the risk of collapse wouldn’t be an issue. A BRB with a low to medium response rating would indicate that after a blast event, the damage would be expected to be low to medium, with no danger of collapse.

With blast tents, large open areas are the norm; however, round ceilings and side walls create limitations on the usage of that space.

Blast-resistant modular buildings may seem limited on size, but being modular in construction, units can be combined to create large open floor plans to accommodate larger areas like meeting and lunchrooms. Modular buildings can be sectioned off with walls and used as control rooms, offices, kitchens, bathrooms, locker areas, laboratories, and much more.

As mentioned previously, blast tents may seem more economical to accommodate large groups of contractors. However, there are several areas where blast-tents cost more in the long run due to hidden costs.

Sometimes turnaround planners are instructed to ignore these costs since they can be absorbed as part of the turnaround activity, but they shouldn’t be. Ultimately the customer is writing checks which impact their overall profitability.

One hidden cost is the time that they take to assemble and disassemble onsite. This creates more of an impact in an already crowded environment.

With a BRB, there is little assembly time, because the construction happens before it ever ships and the onsite installation is finished quickly.

Another hidden cost is the expense of heating or cooling a tent. They are large, uninsulated structures and they are typically used in either hot and humid, or cold environments. It takes a lot of power to keep them comfortable.

A BRB will come delivered with the HVAC needed to heat and cool it and it will be an easier task to maintain the comfortable environment that will give the team working in them a respite from the harsh elements outdoors.

The main selling point of a blast-resistant tent is that it is a large, efficient use of space, but in actuality, not all of the space provided by a tent can be used.  As a matter of safety, there is a large “no use zone” around the interior perimeter of tents.

Since they have large deflections during blast events, tent providers recommend that personnel and items not be placed near the perimeter, for safety reasons.

In comparison, blast-resistant buildings do not have a “no use zone”. All space is available for use.

On a blast-tent, there is also a larger footprint on the outside perimeter than might be expected due to tethering. A tent measuring 70’ x 100, in actuality may actually use a footprint of 90’ x 140’.

With a blast-resistant building, no extra space is required.

Once you’ve compared all of the significant points, plus considered your facility’s needs, you may have come to a conclusion on the best type of blast-resistant structure for your project.

It’s never too soon to get potential vendors involved in the planning process for your turnaround project.

Beginning talks with potential vendors early in the process ensures that you will have the structures you need in the most economically efficient way possible.