This article was co-written for the June 2021 issue of Hydrocarbon Engineering by members of the staff of RedGuard and RedGuard Specialist Services. It is republished here in its entirety.

Even with the adoption of API 753 and all the process safety changes made in the last 15 years, the danger is still great in hydrocarbon processing plants and the upstream feed. In 2020, there were 71 deaths and 216 injuries worldwide in refineries, petrochemical plants, and in relation to pipelines.

As part of required quantitative risk assessments (QRAs) in process plants, engineers determine safe siting for portable buildings to protect them from fire, gas and vapor cloud explosions. In congested facilities where the buildings can’t practically be sited outside of identified blast hazard areas, buildings must be engineered to protect occupants from the hazards. In the case of protection from a vapor cloud explosion, this protection can come in the form of a blast-resistant module (BRM).

Before examining how to fabricate and test a blast-resistant module, let us first consider the forces it is designed to mitigate. A vapor cloud explosion is just as it sounds–it can originate in a broken pipe or valve, or an overflowing distillation tower, as demonstrated by the Texas City example. Due to the temperatures and pressures of many of the refining processes, a release to the atmosphere causes the hydrocarbons to vaporize. If not stopped quickly, this vapor forms a cloud close to the ground. Once that cloud finds an ignition source, an explosion can take place, often setting off multiple explosions. When large vapor clouds form, explosions will have longer durations (50 to 200 milliseconds) than, for example, a weapon’s discharge. Ultimately, this means blast-resistant modules must withstand forces over a longer duration than a building used for military applications, like a military guardhouse.

Once the engineers have identified the blast zones, not every petrochemical plant or refinery may need to consider the implementation of blast-resistant modules. However, in some cases, a QRA may conclude that an existing building is now in a blast zone due to process changes. In some cases, typically with lower blast ratings, these buildings can be retrofitted. This work must be designed by an engineer with specific blast protection experience and performed by qualified contractors. Retrofits vary greatly from simple glass replacement to significant structural changes. Sometimes the simplest solution is to pull the people and buildings out of the blast zone and relocate them to non-blast areas. It is important to consider process control and process safety, as well as work efficiency.

In cases where new space is required, a modular solution like a BRM can provide a fast and cost-efficient solution. Onsite disruption is minimized, and weather delays are eliminated, since the modules are built in a factory. The design, fabrication, assembly, quality control and testing are done by people who make blast-resistant buildings every day.

As a leader in the design and manufacture of blast-resistant modules, how do you prove a design will work when hit by a blast like those predicted in a quantitative risk analysis? RedGuard and RedGuard Specialist Services, have done multiple large-scale blast tests to prove the efficacy of their steel designs. The first was done in 2007, at the beginning of the BRM industry, using 1250 pounds/567 kilograms of ammonium nitrate and fuel oil (ANFO). The second was completed in 2020 with 6000 pounds/2721 kilograms of ANFO. The purpose of the larger charge weight and longer standoff distance was to increase the blast wave duration on the buildings, while also applying a high blast pressure. The live blast test also validates structural computer modeling and challenges basic structural design assumptions. Various accessories were also tested, like windows, blast anchors and intumescent coating.

The rest of this article will explain the set-up, execution and results of the 2020 test.

The photo below shows the layout of the blast test. The test arena was located in Deschutes County, Oregon. 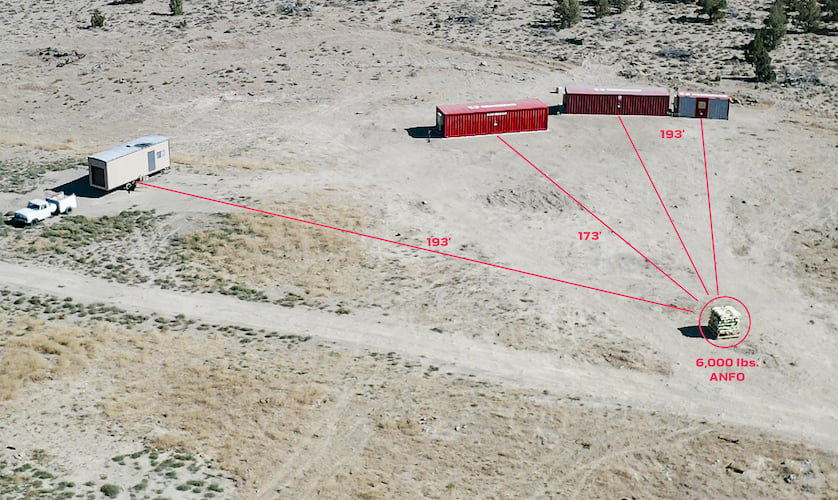 Anchored Unit Before the Blast:

With the buildings and truck in place, RedGuard and the testing company spent nearly a week installing a wide array of measurement devices, including:

When designing a BRM, each component must be analyzed for its reaction to the blast. The combination of all components must withstand the free-field blast pressure, blast duration, and not exceed the designed damage level per the American Society of Civil Engineers (ASCE). The ASCE levels are low, medium and high response:

LOW – localized component damage. The building can be used, however, repairs are required to restore the integrity of the structural envelope. The total cost of repairs is moderate.

MEDIUM – widespread component damage. The building should not be occupied until repaired. The total cost of repairs is significant.

HIGH – key components may have lost structural integrity and building collapse due to environmental conditions may occur. The total cost of repairs approaches the replacement cost of the building.

RedGuard and RedGuard Specialist Services only design buildings to low or medium response levels due to concern about occupants in a building that has lost structural integrity. It takes more steel and a more conservative design to achieve a low and medium response.

After the blast test, when data from the above instruments are collected, a huge amount of effort goes into analyzing the deflection or deformation of all measured components to be sure that the intended design is met. 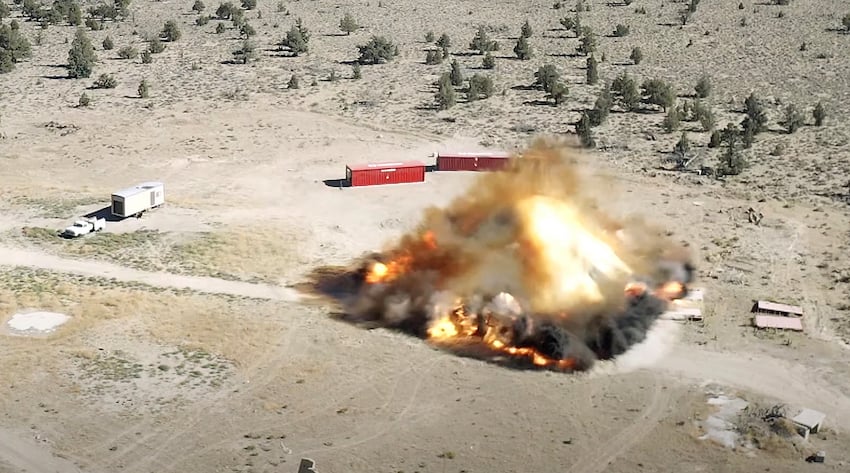 Above, the blast wave is propagating toward the test buildings as filmed by a drone. The blast was created from 6000 pounds/2721 kilograms of ANFO, slightly elevated in the center of the arena.

Below is an excerpt of the test pressures generated by the blast.

The full test report is 254 pages, and with nearly a terabyte of data, photos and video collected. It is impossible to share all of that in a single article, but to offer an understanding as to why blast-resistant modules are used, refer to the before and after photos of the 12’ x 40’ anchored BRM. It sustained no structural damage.

Anchored Unit After the Blast: 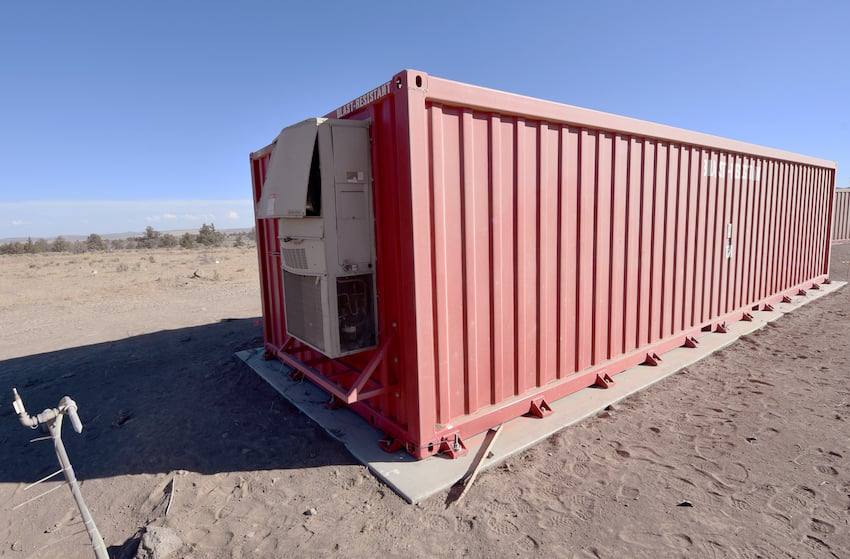 Compare that to the before and after images of the wooden trailer. It was completely destroyed. 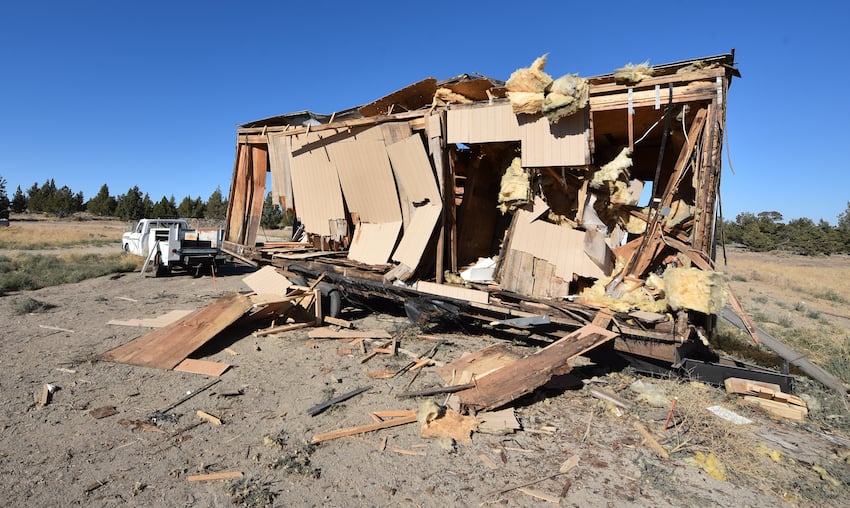 To summarize, the amount of real data that can be collected and applied to BRM designs from a live blast test is incredible. Given the critical life-saving role of these buildings, live tests are vital. The live test confirmed RedGuard's computer modeling, and in some cases, showed the company where its designs were too conservative and could be modified for efficiency.

We have a lot more photos and videos, and even a pdf summary of the blast test report, or, to get even more in-depth, you can schedule an appointment with our blast test specialist, Phillip Lange. 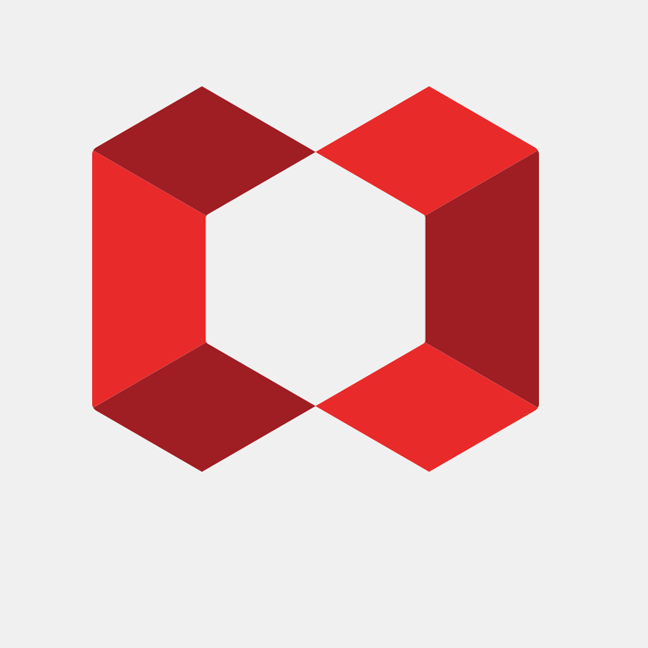