As a leader in the industry, we do a lot of blast testing on blast-resistant buildings. If you’ve watched our videos, or read our blog, you may have heard about “blast response” in terms of buildings. Which just means, what will the building’s damages be once the dust settles? Another related term is “human response.” In simple terms, it is also quite literal. How will a human body respond to a blast when it is protected by one of our buildings? What will its injuries be? 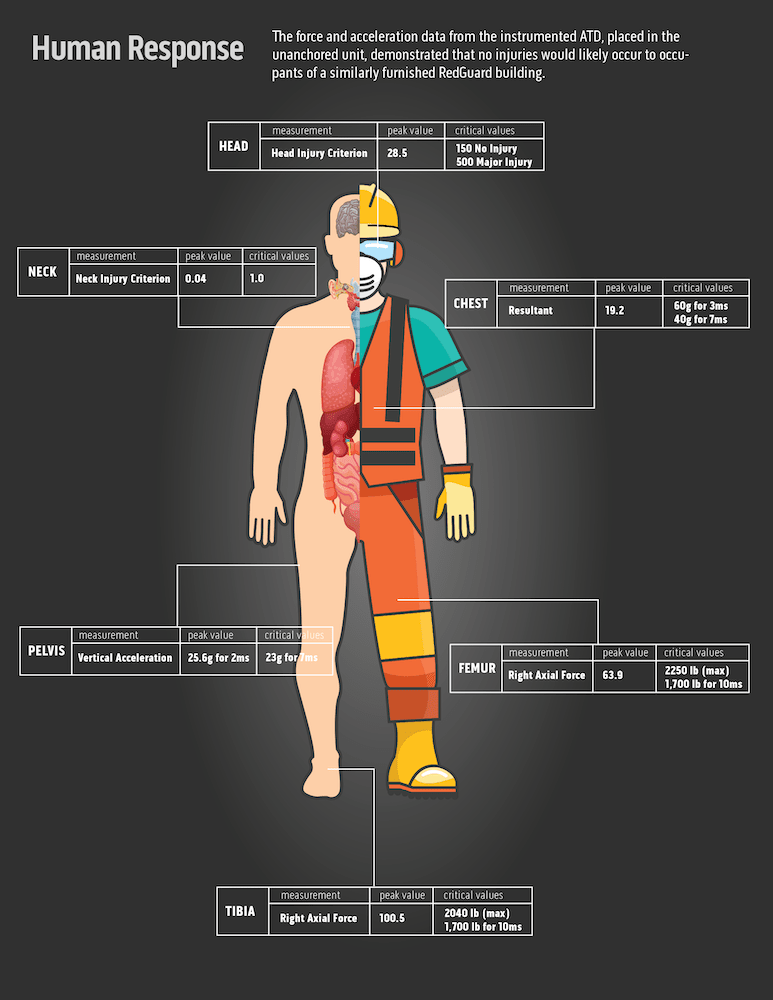 We’ve done our fair share of testing, which not every blast-resistant building maker can say. Our official blast test report contains a set of results. Based on that, we created the illustration at right.

In evaluating the data, this writer’s first question was, what unit are we measuring? What is the g? Is it grams? What do the numbers mean? I was surprised to learn that the lowercase g is not grams, but g-force equivalent.

You have probably heard the term g-force, especially if you’ve ever watched or read about fighter pilots or astronauts. You may have seen the question “How many g’s can a person survive?” or maybe you’ve wondered how many g’s an astronaut experiences in space. (FYI - the answer is 9g, in terms of survivability, and 3g for astronauts, during something like a rocket launch.) But, what does that mean?

A measurement of g-force is the amount of force per unit mass. The force causes stress or strain on objects by creating the perception of weight. Unfortunately, the human body can take very little weight or force of this type, at least for very long. (But we’ll get back to that later.)

The gravity on the Earth’s surface that we all experience every day, at all times, is equivalent to 1g. A basic swing in a playground will apply 2g of force at the bottom of its arc. A roller-coaster will apply 3-4g of force in a tight curve or an arc during the fastest part. However, if you are free-falling toward the Earth, you will experience 0g or weightlessness.

But, let's get back to the earth’s surface…

Have you ever noticed that when you’re in a car, if you accelerate, you can feel your body push back into the seat as if you just got a bit heavier? The acceleration you feel is g-force. Most cars and trucks add somewhere between 0.75g and 0.95g of lateral force during acceleration.

You may have also heard people talking about the number of g’s a football player might experience during a tackle before it leads to injury. It’s thought that a tackle strong enough to cause a concussion will come in somewhere around 100g! If this seems confusing, that’s because it is. The amount of force that can cause injury is not defined well, and it’s all dependent on variable factors. Some of those factors include, but are not limited to:

Then, you would combine that with what direction and how fast the person or object that will eventually impact the athlete is traveling. On top of that, you must consider each person’s body mechanics and brain structure and their individual variations.

So, if a pilot can only take 9g, how can a football player survive a tackle that puts 100g of force on the body? The key is the amount of time the individual is subject to the g-force. A pilot will be subject to 9g for a more extended period than the few milliseconds of the force during a football player’s tackle. A pilot will likely also wear a special “g-suit” that pushes the blood from their lower body up toward their brains. And, they will have trained their bodies in various ways to take more abuse.

But, in the end, the biggest differentiator is time—minutes versus milliseconds.

The variations in the body and individual situations are why testing under controlled environments is essential. Controlled environments are the tools that the experts use to develop the equipment needed to protect the human body. That could be in athletic gear, like better helmets and pads, improvements to our vehicles, airbags, and seat belts, or, developing a blast-resistant building that will shield human bodies.

Because, you guessed it, events like explosions can also create g-force in their blast wave. A blast test and an ATD, or anthropomorphic test device, can be used to measure the acceleration data in an explosion. (An ATD is even more commonly known as a crash test dummy.)

An ATD will show how much force was applied to the human body during the explosion. The result of higher forces, or “more g’s,” means the body, or various parts of it, could be subject to injury or strain.

During a blast test, the ATD will measure the peak value experienced by the dummy for various systems in the body, and for how long. Crash test dummies have been around since 1981. Through experience and time, we know that there are critical thresholds for injuries.

At RedGuard, we believe in testing. We know that the most critical element of the blast-resistant building is its ability to protect lives. For this reason, when it comes to testing, we don’t just test the building. We also place a crash test dummy inside to see what it will “tell” us.

To hear more details about the tests that led to the illustration for human response, we invite you to check out our blast test page, where you can download our executive summary.

If you'd like to have a more in-depth discussion about human response, or schedule a meeting with one of our technical experts for an interactive presentation about our blast test talk to us today!