Blast-Proof or Explosion-Proof Buildings: Why You're Saying It Wrong In an industry that is as young as that of blast-resistant buildings, much of the terminology is still very new. This industry only came to be in 2005, after an explosion at a Texas City refinery that killed 15 people and injured nearly 200. 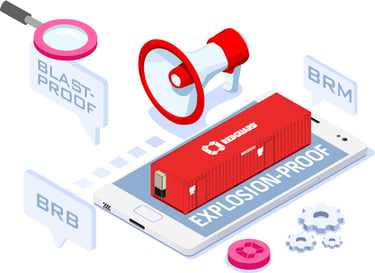 We often get asked about our “blast-proof buildings,” and we typically don’t correct the people saying it, because we know what they mean. At RedGuard, we prefer the term blast-resistant. In fact, as industry leaders, we've written a guide on blast resistance to cover all the bases. But, back to "blast proof"...

What does blast-proof mean?

The word “proof” implies that something is impervious. However, there really is no such thing as a blast-proof building. If you exceed the load that a building is designed to resist, there's a strong possibility that it could fail.

The word “resistant” means that the object can resist some type of hazardous penetration. In our case, blasts or explosions, but you may also think of objects that are water-resistant, slip-resistant, heat-resistant or puncture-resistant.

Blast-resistance has a lot of nuance to its meaning because during an explosion there are many factors at play that determine the amount of damage, such as:

Structure of the Building

We’ll start with structure because the structural engineering of a blast-resistant building is probably the most critical factor in protection. When talking about a blast, or explosion, there are a few ways you might see the details expressed. One of those is the building’s response.

Engineers use mathematical models to predict how objects will respond to a blast to design safer buildings. This is where the term “blast response” comes from, in relation to a blast-resistant building.

The American Society of Civil Engineers defines criteria for blast-resistant structures: they are rated High, Medium, or Low response. A High response means a high level of damage may occur in response to an explosion. A Low response means very little damage or response to a blast. (Medium, as you might guess, falls in the middle of that range.)

All structures classified as High, Medium or Low Response are considered blast-resistant, though not all are equal. And none of them would be regarded “blast-proof.”

In engineering explosion-resistant buildings, some manufacturers create structures that protect in a way similar to the rib cage of a human body. Much like the rib cage protects internal organs by compressing to dissipate energy, the best structural designs are those that employ closely spaced beams that do the same thing.

Manufacturers of blast-resistant buildings will have different explanations for their design methodology, or why they design to a specific blast response level, but it’s important to look at whether they regard structural integrity as a priority, or if they simply meet the minimum requirements to get their building rated.

Hand-in-hand with the structural engineering of a building is the building material itself. Today’s manufacturers of blast-resistant buildings are wise to take lessons from the past. Going back to the example of the Texas City, Texas refinery, it experienced an explosion in its isomerization unit, killing 15 workers and injuring 180. By now, the amount of damages awarded for that single incident has surpassed two billion dollars.

When looking at that catastrophic event, experts observed that the onsite offices, which were temporary trailers, were completely destroyed, while metal shipping containers that were inside the blast zone were still standing, their contents intact. The shipping containers became the basis for an idea to create blast-resistant buildings, and extensive engineering helped created a final design that has led the industry in blast resistance.

Blast-resistant builders employ many different structural designs, and materials. There are blast-resistant structures that are permanent brick and mortar buildings; there are temporary blast structures made of fabric (yes, fabric!); and there are modular buildings made of hardened metals that are either portable for temporary use or anchored for permanent use. The strongest of these are built with steel.

Though many materials can be used in the design, none of them are blast-proof, and their levels of blast-resistance vary.

Proximity to the Blast Wave

I suppose if you are far away enough from an explosion, you could say that anything was blast-proof. (Though we would prefer you didn’t.) Like structure, mentioned above, proximity to the blast also makes a difference. A High response blast-resistant building placed in a hazardous process area would be very dangerous in the event of an explosion, even though it is technically blast-resistant. However, if located far enough away from a hazardous area, the protection that it provides is sufficient.

In this way, you could say that a structure’s proximity to hazards can determine how blast-resistant something is.

Duration of the Blast

If how close a building is to a hazard, and the ruggedness of the building’s structure are vital components to blast resistance, it makes sense that the duration of the blast, or how long it lasts, is also a significant factor. There are some details you can consider when planning for safety.

Manufacturers of blast-resistant buildings usually employ a combination of pounds per square inch (psi) and a duration of time, expressed in milliseconds (msec) that the pressure of a blast is applied. Seeing that a building can withstand an 8 psi / 200 msec is good, but what if you saw 8 psi / 500 psi-msec? Would you know the difference?

Unfortunately, the use of this lingo is often inconsistent from one manufacturer to the next. As an example:

One description communicates the duration and the other the impulse, or measure of energy of the blast event (psi-msec). Unfortunately, that difference is lost on many seasoned professionals in the oil and gas industry. The 500 psi-msec impulse appears to signify a more substantial building than the 200 msec duration rating, even though both ratings apply to the same building, with the only difference being what is calculated.

This simple nuance can lead to confusion and possibly cause someone to accept an inferior level of blast protection. It’s essential to understand these calculations and to ask whether the description you see communicates a duration or a measure of energy. Understanding the level of threat that a building can withstand, within a set time, is critical. Be cautious of manufacturers that fail to give you clear information when you ask about the duration of time a building can withstand its psi rating. It’s possible that they don’t understand this nuance themselves.

The Verdict on the Term “Blast-Proof”

Put this all together, and you can see why the terms blast-resistant or explosion-resistant are the preferred terminologies. Simply put, we don’t say blast-proof, or explosion-proof, because we know that explosions are powerful forces. If you exceed the load that a building is designed to resist, it might fail.

At RedGuard, we never sacrifice safety. We find it best to plan for what could happen and even go a step further. We'll never say it's blast-proof, but it will be the best blast-resistant building in the industry.